Memories Of The Future, the creation

Memories Of The Future just has had it’s premiere on the 6th of January 2023.

Despite the massive amount of preparations, We still had time to write down some more background information on how the performance was created. 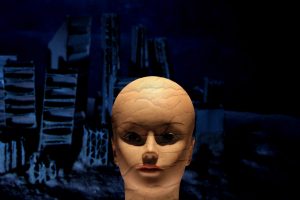 Small Disasters
The performance that started in 2018 as “Small Disasters”, has now been released as Memories Of The Future.
Between 2019 and now the world changed, due to Covid and other events, at such a speed that we had to adjust the performance. The way we create performances means that we look for a story in the objects from our collection and the visual style that inspires us at that moment. But at the same time we also have our antennae out to what is happening in the world, to translate that content into story, images and scenes. In addition, we are also always experimenting with new possibilities to create visual theatre with objects to reshape the legacy of puppetry in the new age. Based on the material we worked on in 2019, a completely new performance was created.

Live animation
After the success of the previous live animation show Rusty Nails & Other Heroes, we wanted to go one step further. We wanted to use more cameras that we could mix live on stage. The first period of production consisted mainly of experimenting with several prototype sets, figuring out how we could control the images ourselves, and developing the technical set. We have always been inventors of new interfaces between visual theatre and audience, which are also part of the story in terms of content.

We came up with miniature cinematographic options such as a crane from an old office lamp and a mini camera on a slider. A huge asset was the computer program Show Cue Systems, which enabled us to control all the stage technology ourselves during the performance, without the need of a technician in the room. This is very unusual for such a complex show. The advantage is that we can now operate the tech as players as part of the dramaturgy and make its timing and dynamics part of the content. It then took quite a few rehearsals before we could work smoothly with it and make beautiful transitions and camera movements so that it would appear on the projection screen as a film.

Kienholz and crossover
A TAMTAM performance often starts with a thorough search of our object collection and this time they were mainly screened for their quality as actors or props with talents on camera. We wanted to make a real crossover between our visual work, visual theatre, music and animation film. So the visual quality was even more important than before. The influence of our visual work is clearly visible now, and the spectator is actually presented with a kind of exhibition, but one of which we determine how long each image can be seen and in what order.

Edward Kienholz (known from for instance The Beanery at the Stedelijk Museum in Amsterdam) was a great source of inspiration for the images. He is one of our favourite artists. Over the years we have made various miniature decors inspired by his work. We absolutely share his love for decay and worn out materials and in this performance this source of inspiration can be found in a number of miniature sets that we built. In recent years, we usually start from the raw, unprocessed objects as much as possible. But those who remember No Problem Or The Secret Life Of Objects know that we also really enjoy building props…

The music and soundtrack
During the covid period, Gérard was often in the studio or at home behind the piano recording music as an outlet for the frustrations of not being able to perform. Those tracks have become the basis of the soundtrack for Memories Of The Future, and they often carry the emotional atmosphere of the lockdowns, just what we needed. They were then extensively edited, supplemented with effects and adapted to the scenes, until it finally became a coherent soundtrack.

The story in several layers.
In the wordless theatre that we make, the story is told by everything but text. In the case of Memories Of The Future it is not a compelling story as in classical theatre or film, but it is certainly not an abstract performance either. We gradually developped, based on results from the research period, a tight scenario that is rewritten many times during the creative process. In doing so, we investigate how the viewer will interpret the images and how we can make the meaning of the different scenes clearer through the order of them in the performance.

The content is in different layers: image, light, sound, movement, play with the objects and the meaning of the objects themselves. That content can be extracted by each viewer in their own way. The scenes often have a double meaning. An animation with a VW van, for example, that drives through a landscape and goes faster and faster until it finally crashes is funny in itself because of the used animation technique, that refers to how a car was made to drive in The Flintstones. But it is also a metaphor for the unstoppable momentum of progress, and in that sense a scene that sums up the whole performance.

The lack of text leaves room for the audience to think and relate the content to their own experiences. That is why we try as much as possible to look for a universal visual language that increases the impact of the scene. We often hear that viewers think about scenes long after the show, and that is exactly our intention.

Mars
In a performance in which the end of the world is predicted, the great danger is that it becomes moralistic or that a guilty party is pointed out. Part of the research therefore focused on the search for an overarching story that enabled distance from the subject. The discovery of seeing it from the perspective of Martian colonists was a major breakthrough in the production process. The observant spectator will undoubtedly find clues about what we as makers think of the state of the world and the reasons for this. But we leave the choices that should arise from this up to the viewer. We are more after the spectator’s sense of what there is to lose…
The scenes that are sent to Mars as fake news contain a number of metaphorical images and situations that reveal their content only upon closer inspection.

Fake news
The introduction of the phenomenon of fake news was another discovery that solved a dramaturgical problem, but also turned out to be more interesting in terms of content than we initially suspected.

Of course we know the fake news from Trump, Putin, internet trolls, covid-deniers and the like. But we found out that everyone in a difficult situation tends to invent fake news for themselves to make an event a bit more manageable. We had imagined the mummy as the only survivor, but then there was the duality of the puppeteer: we play that the mummy is alive, is he really alive or not…. One of the possible answers was that they made up the mummy so as not to admit that no one was alive anymore on earth…

And in the end, theatre is completely a fake reality, and precisely because all images are made visible on stage, the difference between real and the perception of it is obvious. Which is also a substantive statement that becomes clear through the form.

Read and see more about the performance here

PrevpreviousRecording the voice over with Redmond O Hanlon