making of the tube

Over the past 40 years, the creators of TAMTAM have been known as inventors of “theater machines”: alternative ways of showing visual theater. Inventiveness and originality are words that frequently appear in reviews.

During the first severe Covid lockdown, Gérard Schiphorst and Marije van der Sande’s thinking muscles went into overdrive. In March 2020, the international tours to Spain, Portugal, Germany, China, Austria, Poland, Iceland and Switzerland were cancelled for that year. And they immediately started looking for an alternative.
Online theater, after all, they felt was more of a report of a performance than an experience: it had to be live! 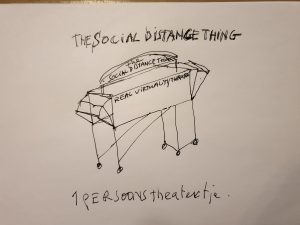 While brainstorming, they came up with the idea of a one person theater with the viewer at a safe distance.

One evening Gérard made a sketch and the next day they found a 2.60m long tube of 25cm diameter lying unused in the neighbor’s container (a sanitary installation company). It became a viewing tube!

After the discovery of the tube and the first tests with a prototype with a lot of cardboard, four weeks of continuous work was carried out, without the usual employees, isolated in the workshop.
Every now and then an employee came by to pick up a job or bring a part.

They simultaneously worked on small poetic scenes, each accompanied by its own soundtrack. During the first weeks of the lockdown, Gérard had already composed short music fragments every day that contained the atmosphere of that strange but also special period. Those tracks have become the basis of the music for the scenes.
Marije meanwhile researched the possibilities of combining puppet heads with objects. She made small sculpted heads for this.

After a month, The Tube was a fact. A one-person performance that provides a truly intense and personal 1 on 1 theater experience. The premiere did not take place for a full theatre as usual, but for 1 person: Carlo Verhaar, the Deventer city councillor for culture.

Inspiring Limitations
In corona times, of course, we had to think about what was and what was not possible. That fact was more inspiring than limiting. So, the viewer sits at 2.60 m from the player and looks through a narrow viewing and listening opening that is disinfected for every new spectator. For those waiting there is a red carpet of 9 meters long, divided into sections of 1.5 meters. The hands had to be disinfected, and of course you could pay contactless. That all became part of the theatrical concept. 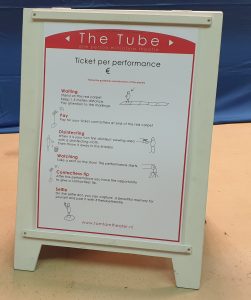